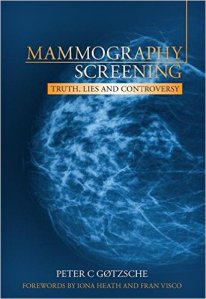 Peter Gotzsche, M.D., author of Mammography Screening: Truth, Lies and Controversy, states, “Screening saves probably one life for every 2,000 women who go for a mammogram. But it harms 10 others. Cancerous cells that will go away or never progress to disease in the woman’s lifetime are excised with surgery and sometimes (six times in 10) she will lose a breast. Treatments with radiotherapy and drugs, as well as the surgery itself, all have a heavy mental and physical cost. I believe the time has come to realize that breast cancer screening programs can no longer be justified.”

Mammograms are the number one source of malpractice lawsuits against radiologists and this creates an incentive to over-diagnose breast cancer.  –  Dr. Fred Vernacchia, a radiologist and medical director at the San Luis Diagnostic Center in San Luis Obispo, The trouble with mammograms, LA Times

More Breast Cancer Experts are Now Speaking Out AGAINST Mammography

Michael Baum, an eminent professor of surgery at the University College, London, was involved in setting up the breast cancer screening program in the UK 20 years ago. Now he is an outspoken critic against mammography. He states, “I have watched with increasing alarm as evidence has accumulated that suggests the initial estimates of benefit were exaggerated and the initial estimate of harm was, frankly, ignored. What has gone wrong is that we would never have predicted how many of these cancers detected at screening lack the potential to threaten the woman’s life.”

Eric Topol, Medscape Editor-in-Chief and practicing cardiologist at Scripps in California, recently wrote an article titled, “Time to End Routine Mammography.” He says, “All of the data now available point to significant net harm—far more risk than benefit— for routine mammography. If this were a drug, the US Food and Drug Administration (FDA) would never approve it. Last year, the Swiss Medical Board, after reviewing all of the data, recommended abolishing mammography.” Time to End Routine Mammography, Medscape

“For too long, we’ve taken a brain-dead approach that says the best test is the one that finds the most cancers – but that’s wrong.”  – Dr. H. Gilbert Welch of the Dartmouth Institute for Health Policy, The trouble with mammograms, LA Times

“The goal of routine breast cancer screening is to prevent women from dying of breast cancer. Yet studies have shown that the popular claim ‘early detection saves lives’ is not actually true.” – Breast Cancer Action, Should I Get A Mammogram? Understanding the Harms and Benefits of Routine Breast Cancer Screening

The Studies, the Facts, the Numbers, the Truth:

A“false negative” is when a mammogram appears normal and cancer is actually present. According to Are You Dense?,  1 in 5 women (20 percent) will feel reassured they do not have breast cancer, when in fact they do. Breast density is one of the strongest predictors of the failure of mammographic screening to detect cancer. Two thirds of pre-menopausal and 1/4 of post-menopausal women have dense breast tissue. Please see Happy Gram the movie and ask for your past mammogram reports to see if you have dense breasts.

Even Worse, Could Mammograms Actually Induce and Promote Cancer?

Dr. Samuel Epstein, chairman of the Cancer Prevention Coalition, and author of 270 scientific articles and 15 books on the causes and prevention of cancer states: “Radiation from routine mammography poses significant cumulative risks of initiating and promoting breast cancer. Contrary to conventional assurances that radiation exposure from mammography is trivial – and similar to that from a chest X-ray or spending one week in Denver, the routine practice of taking four films for each breast results in some 1,000-fold greater exposure. Premenopausal women undergoing annual screening over a ten-year period have an increased breast cancer risk by 1 percent per year resulting in a cumulative 10 percent increased risk over ten years.” – Dangers and Unreliability of Mammography, Cancer Prevention Coalition

What other screening options are there?

Is there anything else I can do to lower my risk of breast cancer?

More info and links to articles on Mammography here.

I am originally from New Jersey and moved to Los Angeles with my family at age 12. After graduating from San Diego State University with a BA in Journalism, I had a short-stint in magazine advertising sales before landing my "dream job" with Club Med. For two years I worked at resorts in Mexico, The Bahamas, The Dominican Republic and Colorado. My husband Glenn & I met in Ixtapa, Mexico and we embarked on a two year honeymoon around the world. This was also a research project for a book we wrote called "When The Travel Bug Bites: Creative Ways to Earn, Save and Stay Abroad." I am also the author of a quote book for new graduates -- "Cheatnotes on Life: Lessons From The Classroom of Life." In 1997, we settled in San Diego and I was blessed to work part-time from home for non-profit organizations while raising our two boys. In 2010, a DCIS diagnosis changed my life. DCIS 411 is the culmination of my on-going journey and discoveries.
View all posts by Donna Pinto →
This entry was posted in Health, Options, Resources, Sanity, Support and tagged alternatives to mammograms, Automated whole breast ultrasound, breast cancer awareness, DCIS, Dr. Kevin Kelley, happygram the movie, mammograms, oveerdiagnosis, overtreatment, SonoCine. Bookmark the permalink.

This site uses Akismet to reduce spam. Learn how your comment data is processed.